Melissa and her son need a new start. Jim wants a second chance. The past can ruin their future…or make it magical. 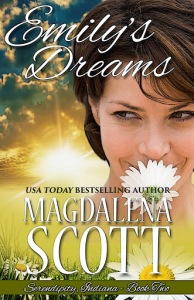 After the accident, Emily must learn how to live, not simply survive. How will David Standish fit into her future? And what is that voice in her head, pushing her along?

Emily Kincaid’s past is strewn with broken relationships and dead-end jobs, and her future is a giant question mark. Everybody wants to help–the nurse’s aide Emily can’t stand, Emily’s grandmother who had the perfect marriage and wants Emily to find the right man, and her teenage sisters who are eager to get her out of their way.

David Standish wants to help too, but he’s the guy Emily can never have. He’s older, and cosmopolitan while she’s small town boring…

And on top of all this, there’s the voice in Emily’s head that keeps giving her advice she can’t understand. 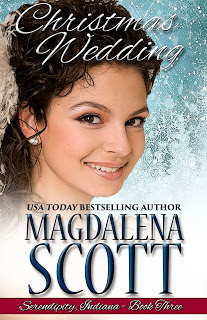 December First—Jim proposed, and Melissa accepted. With just twenty-five days to make it happen, is it possible to create the perfect Christmas Wedding?

Jim Standish is ready—right this minute—to marry the love of his life, with a quick trip to the courthouse. But Melissa Singer wants the event to be beautiful, romantic, and memorable. And on Christmas Day!

Everyone in the Standish family is doing their best to help. But they’re also busy with the holiday season on the Standish Family Christmas Tree Farm. An unwelcome reminder of the past appears, the dress designer is working overtime, and nothing seems to go right.

They just have 25 days to make this event happen. Is it possible to create the perfect Christmas Wedding?

Christmas Wedding is a wholesome, heartwarming small town romance that will make you believe in second chances – and in Christmas magic. 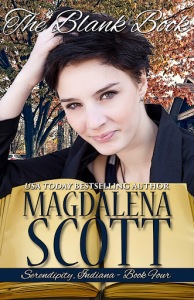 Alice’s small town life was hijacked by a story she wrote in an antique blank book. In movie star Robert’s recurring dream, Alice has the lead role. Does she dare write a new future for them both?

A year ago when her husband died suddenly, Alice Williams’s calm, predictable world changed in an instant. Most everybody in the small town of Serendipity, Indiana has rallied around her, and Alice’s new life is beginning to take shape. But something is very wrong.

A girls’ night out results in an unusual writing project, for which Alice chooses an antique leather-bound blank book. The story she’s begun to pen starts to alter her reality, and that of the man she has met only in her dreams.

Movie star Robert Diamond doesn’t want anything to do with Alice, or with her little hometown. His only reason for coming to Serendipity is to put an end to the life-altering dreams he’s having. Dreams that feature a woman who looks just like Alice…

Only by working together can they uncover the secret behind the Blank Book, and create the future each of them wants.

Writer’s block can be maddening when you’re literally writing the story of your life. 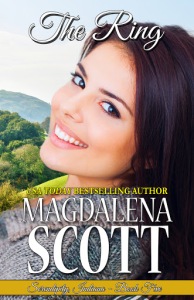 Carla makes wishes come true for everyone but herself. Widower Jared and his kids have won her heart. But is the future possible without forgiving the past?

Carla Standish is the go-to person for whatever her friends and family need, and is world-renowned for creating one-of-a-kind, swoon worthy dresses. She’s even surprising herself and the folks in town by dating a decent guy these days. If one missing piece would fall into the jigsaw puzzle of her life, everything would be perfect. But she ruined that possibility long ago, didn’t she?

It’s been a couple of years since widower Jared Barnett and his kids moved to Serendipity for a much-needed new start. They were settling in, but now he’s getting some confusing signals from the vivacious shop owner he’s dating, and the small town “good old boy” network seems determined to treat the Barnetts as outsiders. An offer he shouldn’t refuse would mean pulling up stakes again, but Jared will do whatever is required to take care of his family, and to protect his own heart.

The Road Not Taken
Book Six 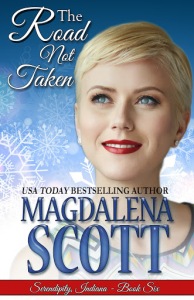 Francie and husband Brad are spending Christmas in her hometown. There are marital problems, career decisions, and a major change on the horizon for the Standish family Christmas tree farm.

Can Francie find a way through all this, to a happy ending for anyone?

A Piece of Her Soul 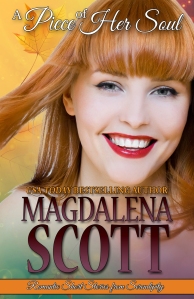 Nick Marshall has a hole in his soul, and Jacqueline must help him find the missing piece. Their teenage history in the gossipy town of Serendipity compounds the situation, as Jacqueline’s visit to help her injured mother (Reba Markland, EMILY’S DREAMS) turns into something more.

The little town hasn’t changed much–the gossip tree still has branches and roots everywhere, most folks remember the town’s past better than they can imagine its future, and the autumn colors are more beautiful than anywhere she’s traveled in the years since she left.

Jacqueline’s gift is needed here, but she won’t risk her heart, or put her family in the spotlight, by staying.

Once Upon a Time
Book Eight 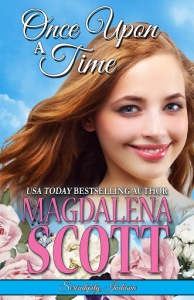 Taylor is looking for a new start. Ken made a commitment he won’t break. Neither of them realizes their future began decades in the past.

Taylor Kincaid and her twin, Hannah,  have graduated college and are ready to leave Serendipity forever… The only problem is an absence of jobs in their fields.

They decide to move back home temporarily, living with their parents again, and taking a little sabbatical from all the hard work (and partying) of college.

But Marcus Kincaid has different expectations of his daughters. The free ride is at an end, and they have to get jobs in Serendipity if they expect to live at home.

Hannah accidentally volunteers to work at the Standish Family Christmas Tree Farm with their sister Emily (Kincaid) Standish. But Taylor decides to float resumes in the little town, and find a job that will pad her bank account, and be easy to leave when the right employment opportunity comes along.

It’s a great plan, until she steps into the antiques shop on the town square, and meets its handsome, enigmatic new owner. Now leaving may be more complicated than staying.

Sweet romance, “coincidences” that might be more than that, and a love that survives the unthinkable come together in this new Serendipity, Indiana tale.

A Cowboy for Christmas
Book 9 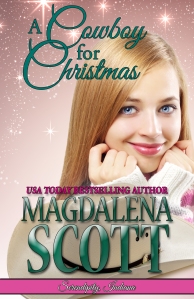 Hannah fell for Jacob the first time they met. His bossy brother Michael keeps getting in the way. Losing isn’t an option in her bid to win the cowboy of her dreams.

For Hannah Kincaid, it was love at first sight when she met Jacob Hollingsworth, the handsome co-owner of Serendipity’s new (and only) dude ranch. When she lost her job at the Standish family’s Christmas Tree Farm, Jacob’s sisters hired her at the Rocking H. Sure, she’s afraid of horses, but she’ll overcome all obstacles to achieve a goal. The unexpected arrival of Jacob’s bossy brother, Michael, turns everything at the Rocking H on its head–including Hannah’s plans.

Michael Hollingsworth was summoned to help his siblings in their fledgling business. He immediately sees a problem: their only employee is incompetent in her work, crazy about Jacob, and…completely enchanting. How can Michael prepare the ranch for the change that’s brewing, when Hannah Kincaid’s big blue eyes and uncompromising determination keep messing with his focus?

Now all of the Serendipity stories are in ebook bundles! 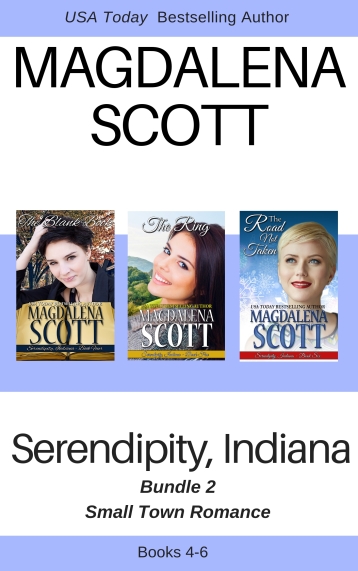 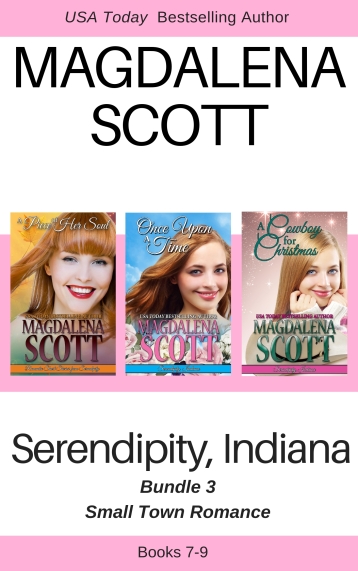 Find complete descriptions of each bundle by visiting this page of my website.