SERENDIPITY, INDIANA BOOK ONE
Melissa and her son need a new start. Jim wants a second chance.
The past can ruin their future…or make it magical. 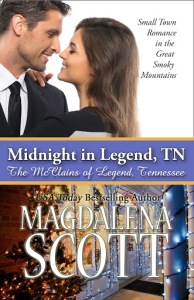 THE MCCLAINS OF LEGEND, TENNESSEE
BOOK ONE

She needs a new life, he’s determined to maintain the status quo. If they don’t compromise, the whole town loses.

Midnight Shelby is starting over. A real estate agent’s virtual tour of a large two-story brick building on the main street of the small town of Legend, Tennessee caught her eye and she’s leaving her smarmy ex-husband, the big city, and corporate life behind. The town is struggling but Midnight has ideas that will give it new life as well.

Martin McClain was born and raised in the Legend area. His family has lived there for generations, and he feels a duty to preserve the past. The website his son Daniel created has been good for business, but although Martin is a real estate agent by trade, he’s wary of newcomers’ motivations.

Especially Midnight Shelby, who seems bent on changing everything…even him.